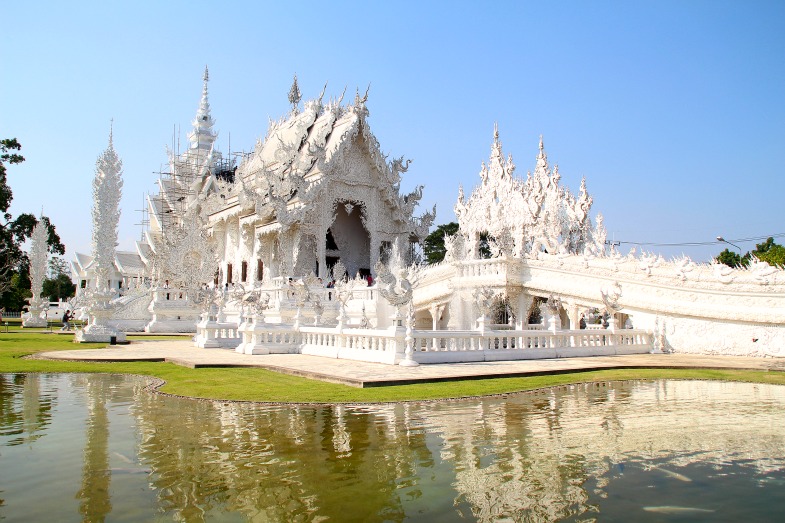 A trip to a temple is definitely not something I would be intrigued by in the past; I am more of a cathedral kinda girl. I was, and still am, into spires that reach way up high into the sky, not to mention the vintage architecture and at times, not so salient but fascinating details engraved into the thick concrete pillars.

Well, all that changed when I saw how majestically unique Wat Rong Khun was on Google! The white structure that glistened under the sun was a win for me instantly!

Since we had the car, getting there was pretty simple and so straightforward; with the help of Google Maps of course! We stayed at The Imperial River House Resort in Chiang Rai, quite centrally located I would say. But then again, with a car, anywhere is centrally located. Haha! 😀

From the resort, it was approximately a half-hour drive to Wat Rong Khun. The landmark to look out for would be the Central Plaza Chiang Rai; this mall was our beacon when travelling around Chiang Rai.

Not renting a car? Then the tuk-tuk is probably the next most convenient alternative! There are public buses to be taken from platforms 7 and 8 at the old bus station; which costs 20 baht each way. But in my opinion, that’s just a hassle, unless of course, you are on a budget.

But with the time spend walking and searching for the old bus station (there are two bus stations- new and old), it really does save time and effort by hopping on a tuk-tuk instead! I am sure you can haggle over the price with them too. Best of all, you could ask the tuk-tuk driver to wait for you. So it’s a two way package.

To enter the main Wat Rong Khun temple building, visitors need to dress appropriately; meaning no shorts, no short skirts, no tank tops and definitely no spaghetti strap tops (applicable to both guys and ladies). They have staff stationed at the entrance and would call out to you if you are inappropriately/ indecently dressed. 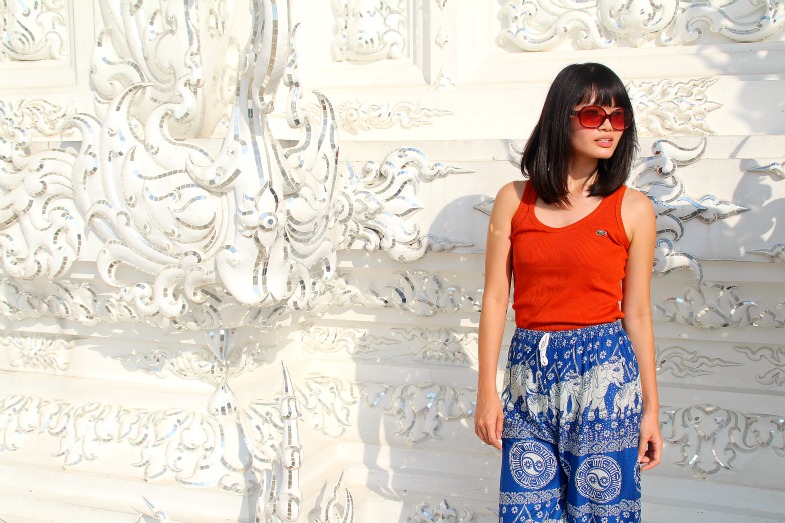 Safe dressing would probably be those baggy pants that you would see being sold literally everywhere in Thailand, and literally almost every tourist was wearing it (both guys and ladies). I got mine from Siem Reap in Cambodia at USD $2.50. I regretted not getting more; they were so comfy like PJs! The ones sold in Thailand were definitely priced more than USD $2.50, just FYI.

For skirts, the staff present was pretty strict about the length of it. I saw her chasing a mother and daughter out because of their skirt length. They were wearing skirts with length to their knees, well… … I reckon that was considered inappropriate according to the staff. So to play on the safe side, if you really want to wear a skirt, keep it long to below the knee? Preferably near to the ankle area? 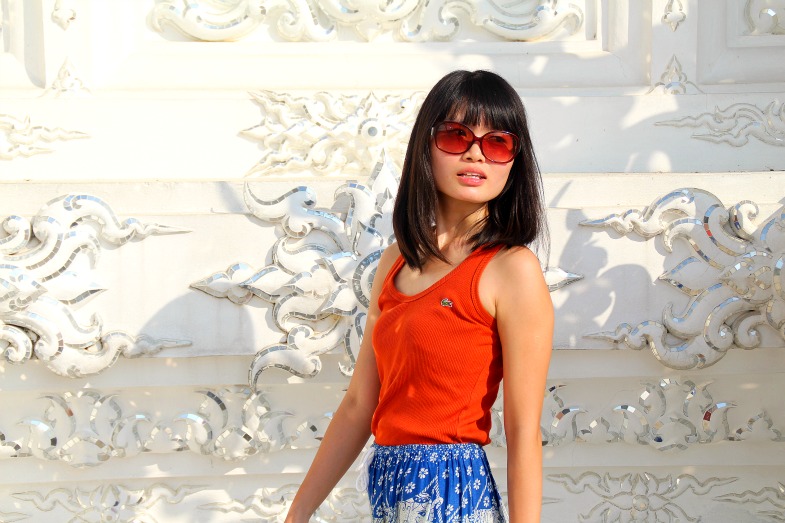 I wore a tank top during my trip there. I could enter and roam the vicinity of temple, which includes the temple gardens, the other smaller buildings and all that jazz. However, to enter the main Wat Rong Khun building, I had to put my outer layer on; which made me look like some hipster hobo. But oh well… …that works too! 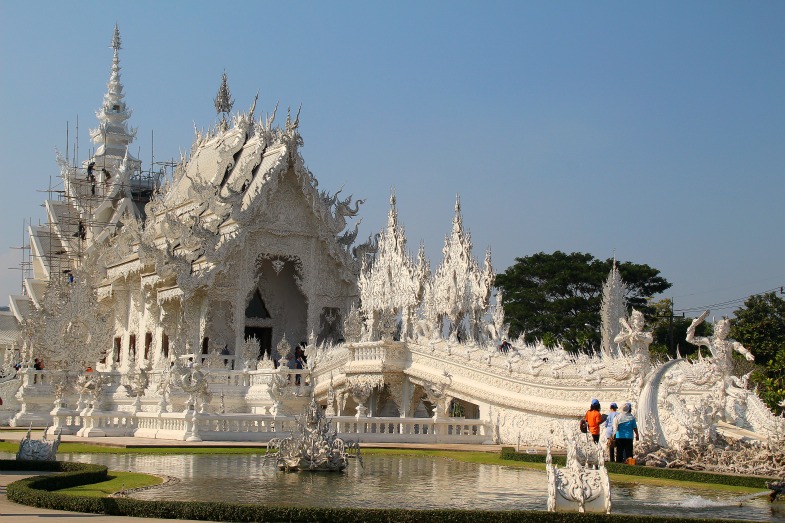 Obviously the highlight has to be the main Wat Rong Khun building. This white temple is just ethereal with a concinnate blend of white purity and dark impropriety. Upon arrival at the site of attraction, the Wat Rong Khun just shined like the leading star it was meant to be. Hordes of people from everywhere posing in front of and beside the building even before entering. 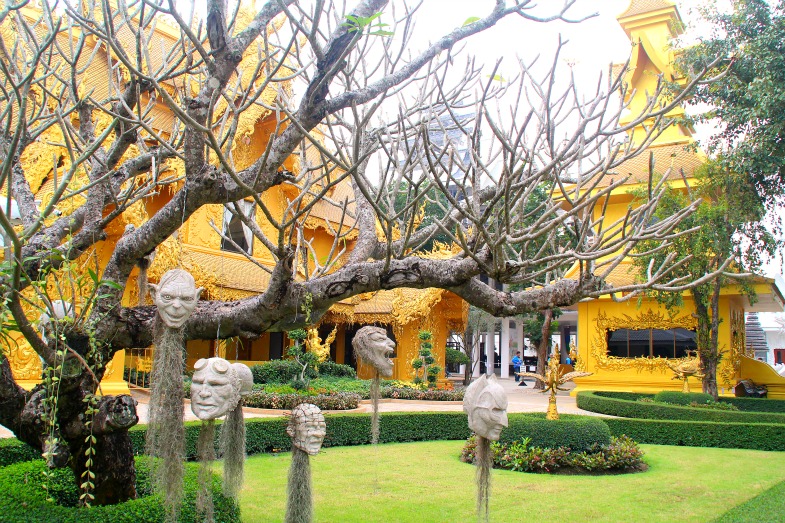 At the entrance, you would be greeted by morbid heads that hung from the trees with grassy mosses growing out of them; heads of humans, ghouls, demons, Gollum and Batman. Yup, you got that right… … Gollum from The Lord of the Rings and Batman, well… … from Gotham City! 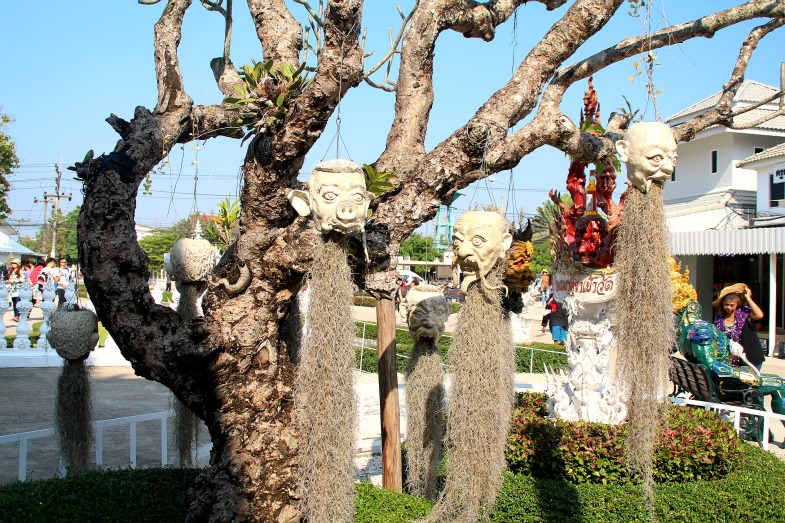 I was honestly surprised when I saw Batman’s head hanging from the tree in the temple gardens. Gollum, I can (sort of) understand… … but Batman?!?! Haha! It was hilarious! I never expected to see a superhero within temple grounds. Because isn’t that worldly affairs? Hhhhhhmmmm… … 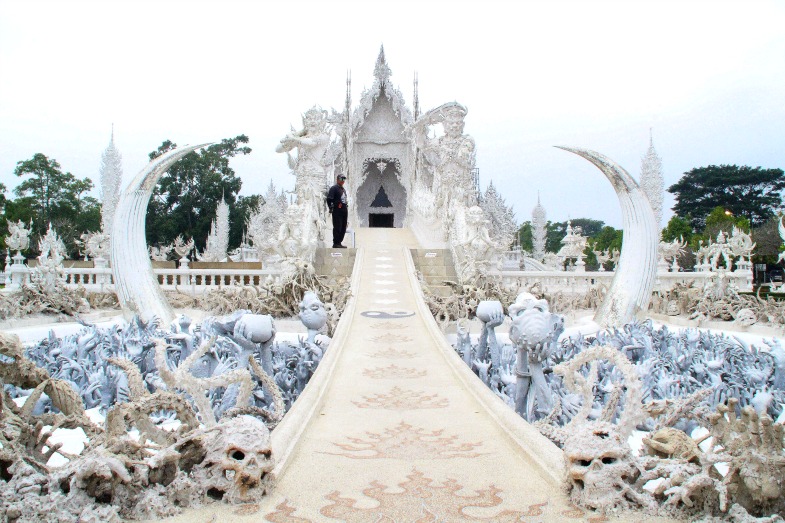 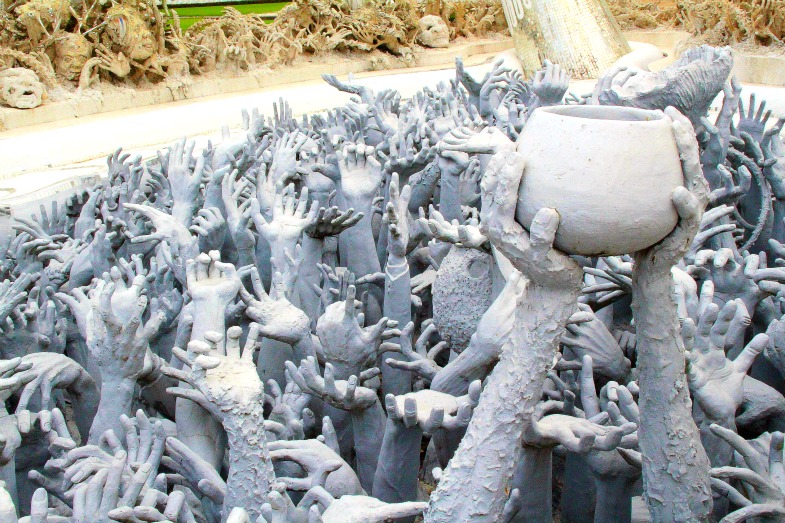 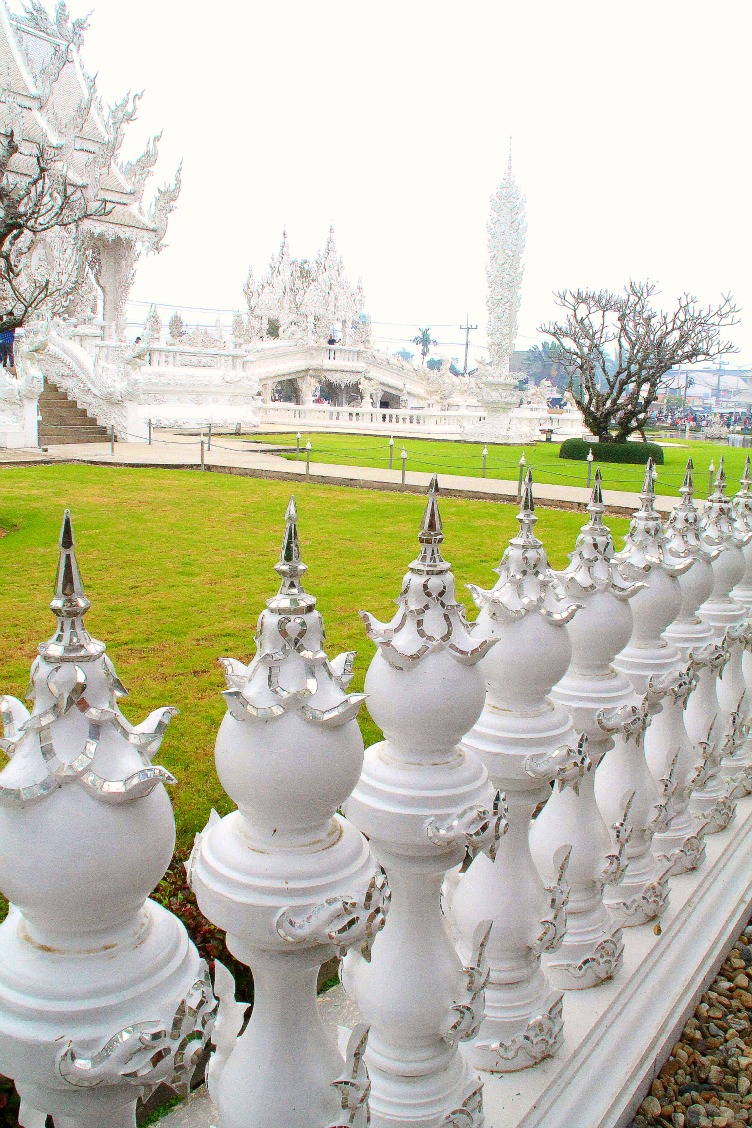 In my humble interpretation of what these all meant to me is that the hands represent the sea of the dead. Because they were trapped in their worldly affairs when alive, hence, even at death they couldn’t let them go that they were still unhappy. As a result, they are stuck in this plight and are trying to reach for someone to grab onto; to pull them out. Or if you think about it from another perspective; maybe they are trying to pull someone to join them? I don’t know about you, but that’s how I felt. It was quite a morbid few seconds of thought after I saw this.

Photography isn’t allowed within the temple hall, and footwear has to be removed before entering. The temple hall is a small space, with a monk sitting at the centre meditating, and people praying alongside. There was a painter busy beautifying the walls of the temple hall during the time I was there. The painter does have some extraordinary skills I have to say.

What caught my attention were SpongeBob SquarePants and Spiderman. Yup, I am not kidding… … Mr SquarePantsee and Spidey were painted (though not very prominent) onto the wall in the temple hall!

I recalled making a quick comment to J asking, ‘Wait, is that SpongeBob? What is he doing here?’ And J responded, obviously without thinking much, ‘Oh so now we know SpongeBob is a deity. Likewise for Spiderman.’

I was speechlessly puzzled! It was hilarious. 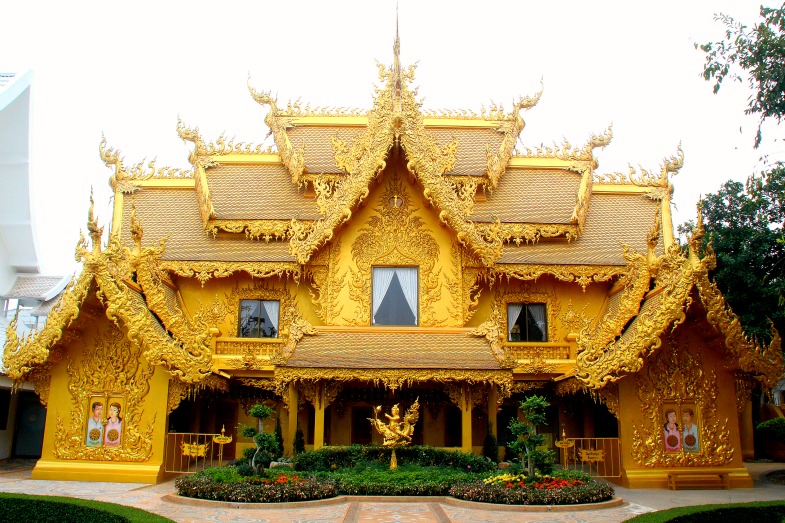 Within the site of Wat Rong Khun, there exists one prominent golden building just beside the main temple. You couldn’t ever miss it. Alas, during my visit, it was codon off to the public. Probably you would have better luck on your visit! 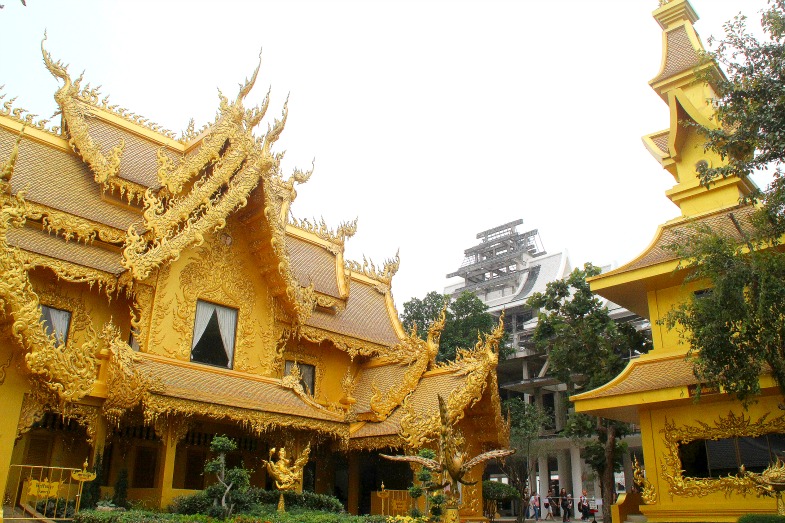 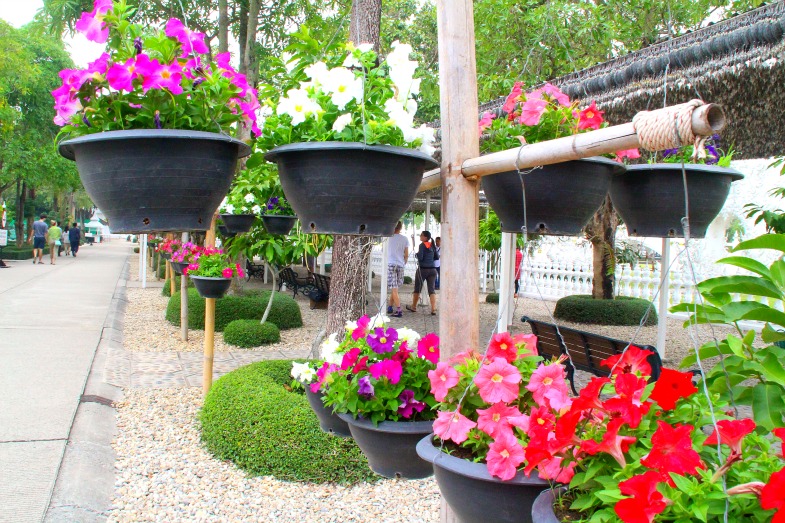 With majority of tourists flooding the main Wat Rong Khun building with selfies and wefies, to achieve somewhat serenity (if even possible) would be to amble around the garden vicinity! There are actually quite a few things to do and see. 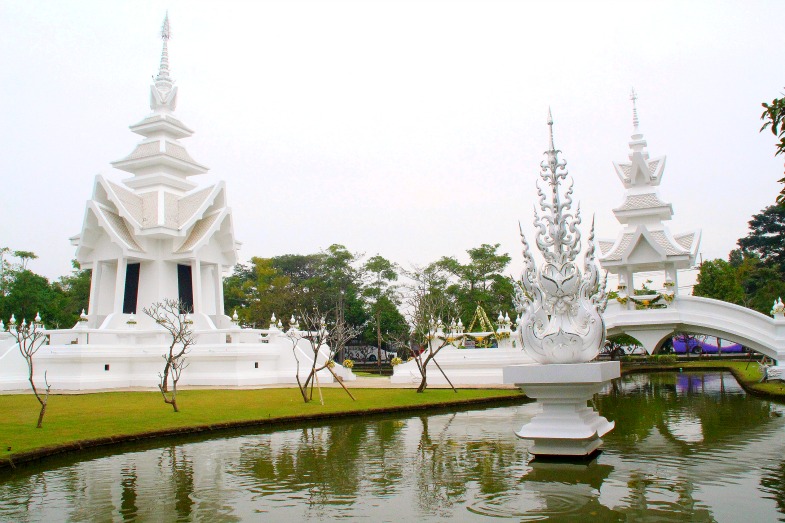 For instance, making a wish in the wishing well which has zodiacs characters engrave around its rims? 😀 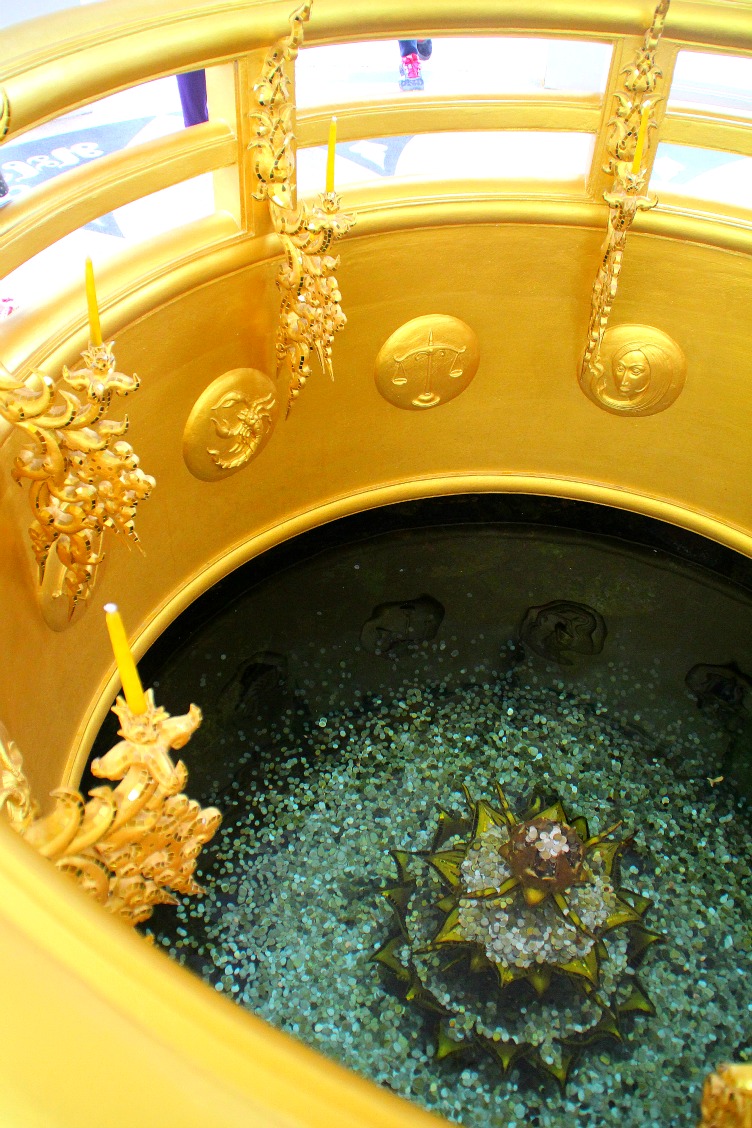 If that isn’t to your fancy, then writing down your wishes and prayers on an aluminium key-looking ornament and then hanging it up for 30 baht? 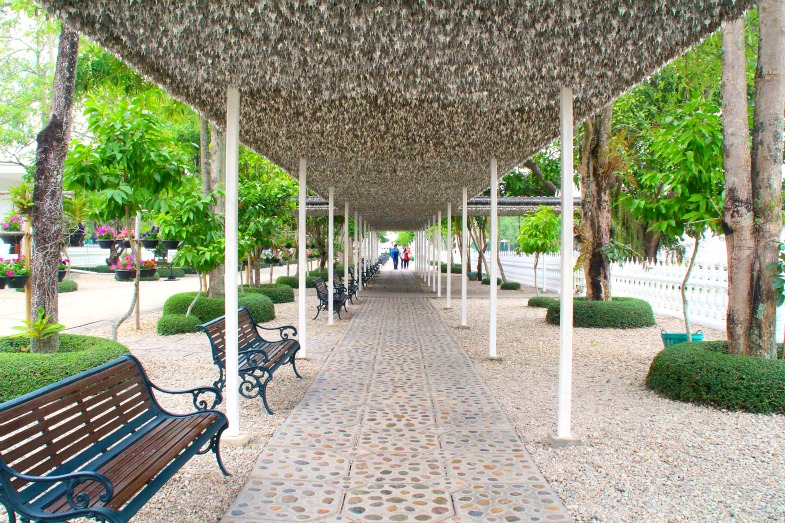 As you wander through the temple garden, you would see hundreds of such ornament being hung up. Some under the sheltered walkway, and some made into a tree- like structures! It was pretty amazing. 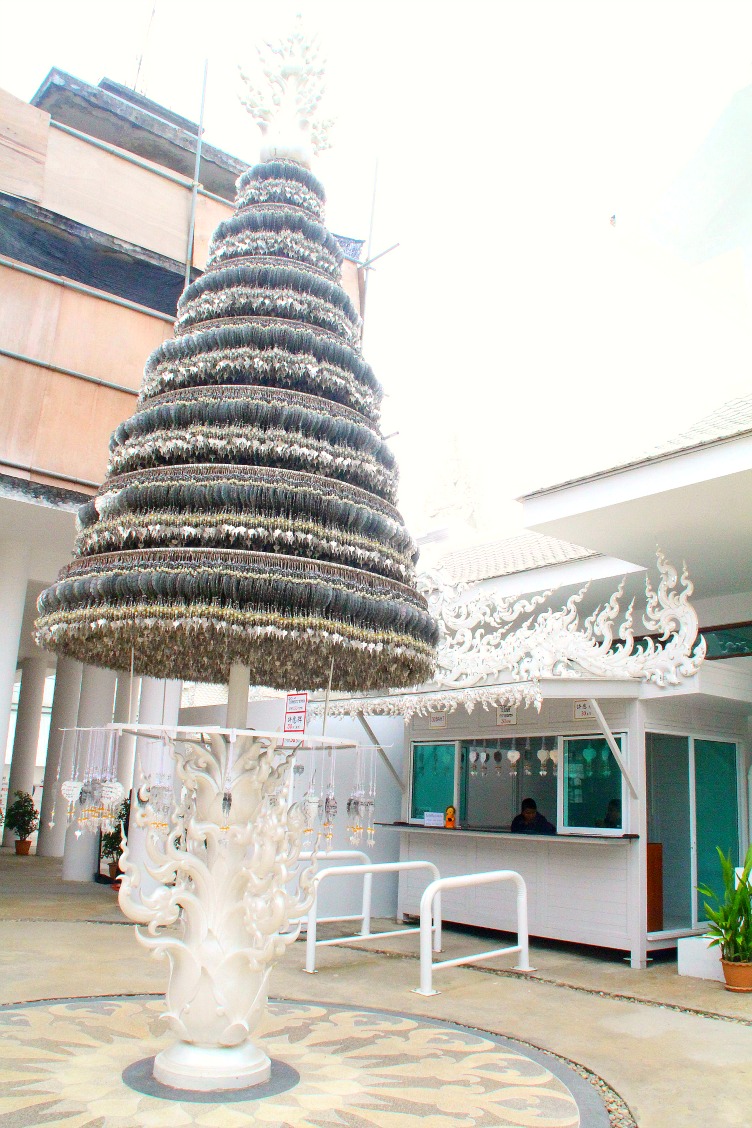 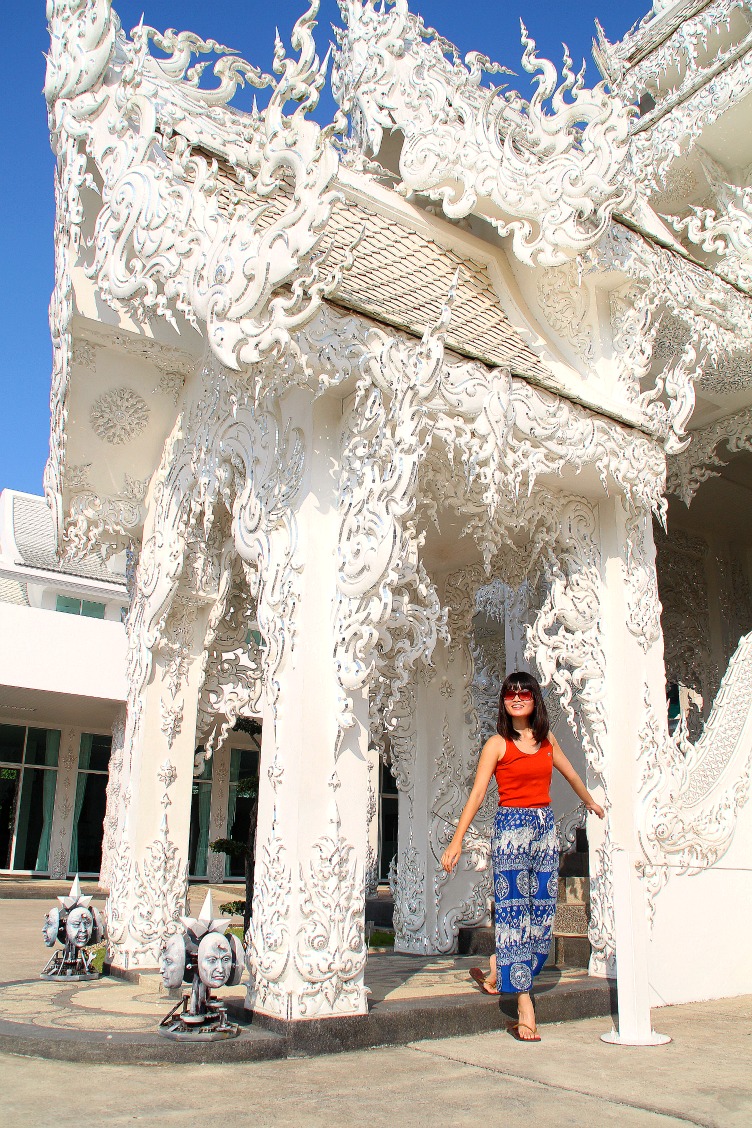 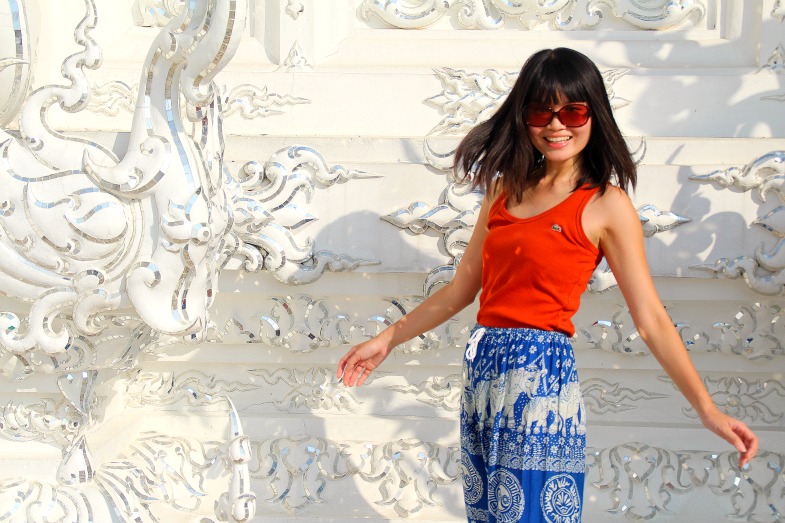 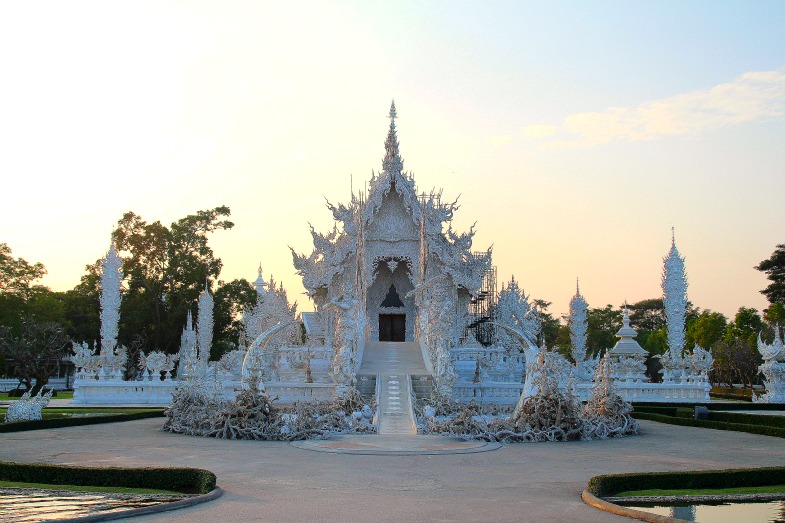 Operating hours is between 8 am and 5 pm. I would suggest arriving at Wat Rong Khun between 7.30 am to 8 am if you want an unimpeded shot of the main white temple building, and to avoid the entourage of tourists flooding in in the late morning. 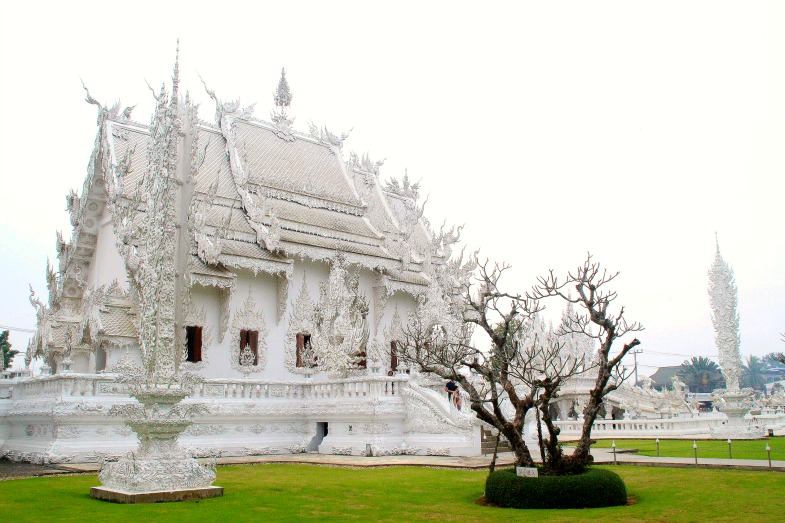 I was complacent in thinking that I would have a next time to get the shot I wanted.

Because of the hordes of people, I wanted to return back the next time to get a better shot with fewer people. But good lighting waits for no man; or woman. The next time we were there, the sky was melancholic; totally regretted my decision. 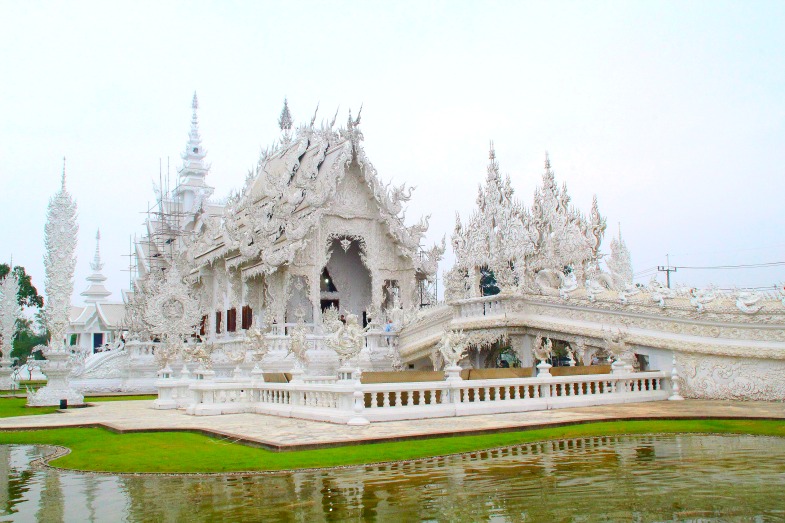 During this trip, I learnt one thing. Take the shot when there is good lighting! DO NOT wait! You might never have a second chance to!

My trip to Wat Rong Khun was not really complete as constructions and decorations are still ongoing. Many areas were codon off to the public too. So maybe you would have better luck than I had!

This article has been converted to a travel article app on GPSMyCity. For more information, click here.