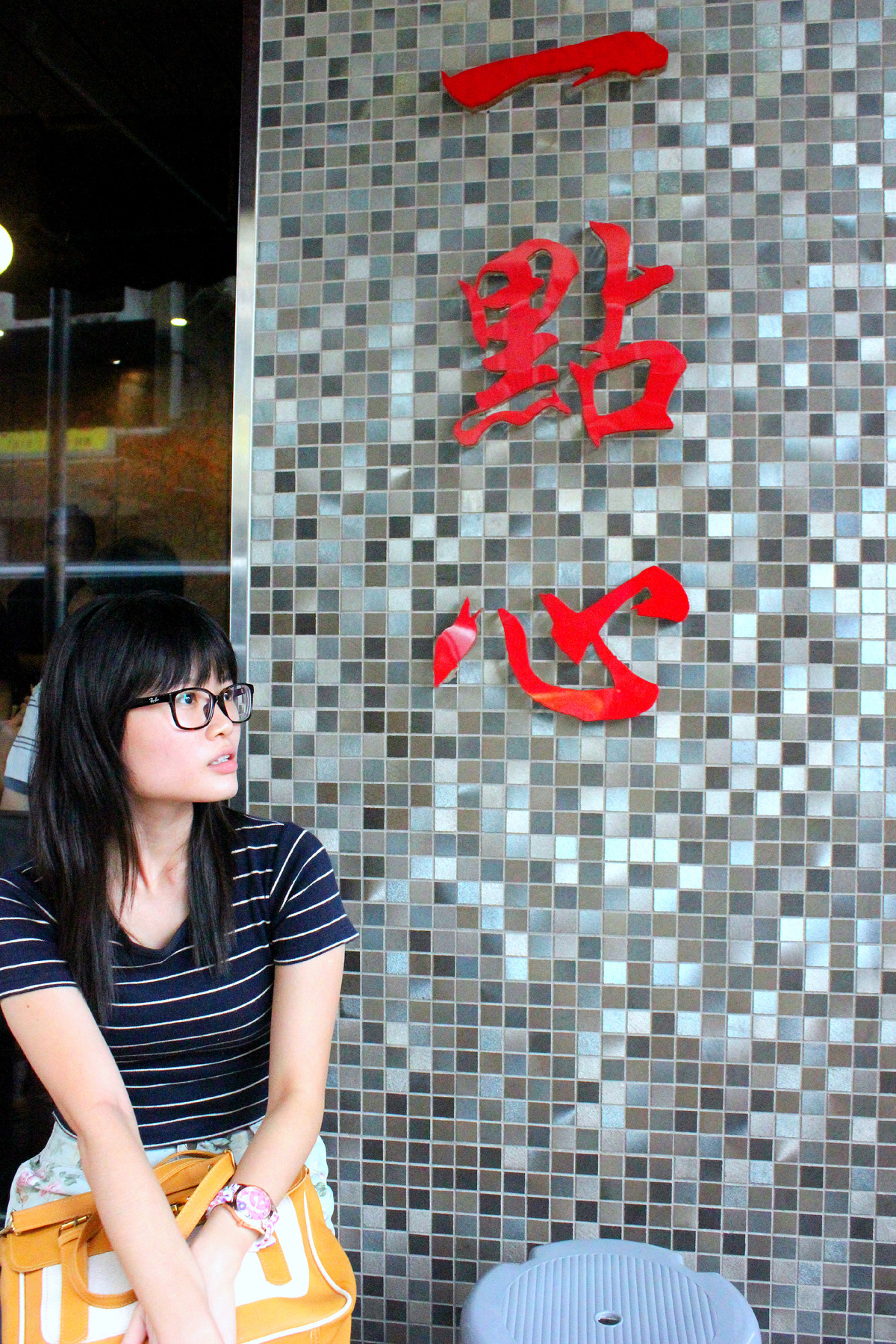 They say Hong Kong is a food paradise.

I was constantly ravenous throughout the entire trip- which was so unlike me. Not that I would starve myself during past vacations; I just wasn’t as famished as I was when in Hong Kong.

My mind was relentlessly thinking about the next day’s lunch when we were still living the day before. It’s bonkers, I know. But hey, what’s vacationing in Hong Kong when we are not in constant hunt for local foods, huh?

Food hunt in Hong Kong was an eye-opener for me. We have tried the best goose rice like ever! Well roasted until the skin was well crisp, simultaneously, the meat was juicy and tender with every mouthful. People, that was one awesome goose. Oh, and don’t get me started on the Portuguese egg tarts, and white egg milk custard- heavenly. 😀

Getting around Hong Kong is really like in Singapore- MTR for Hong Kong, and MRT for the latter. Their subway is so efficient and really affordable. They operate with the Octopus card which can be purchased at the airport.

Just to digress a little (like I always do), since we’re at this topic on transportation! I love how the people working in the subway are so friendly and knowledgeable. They could instantly (literally) tell us which exit to go towards when we enquired where was a certain road or street. For this I would love to applaud them- they do know their stuffs! 😀 Probably there are many other commuters asking the same thing day in day out, so maybe they could remember it by hard. But still, I reckon they deserve some recognition right? 😀 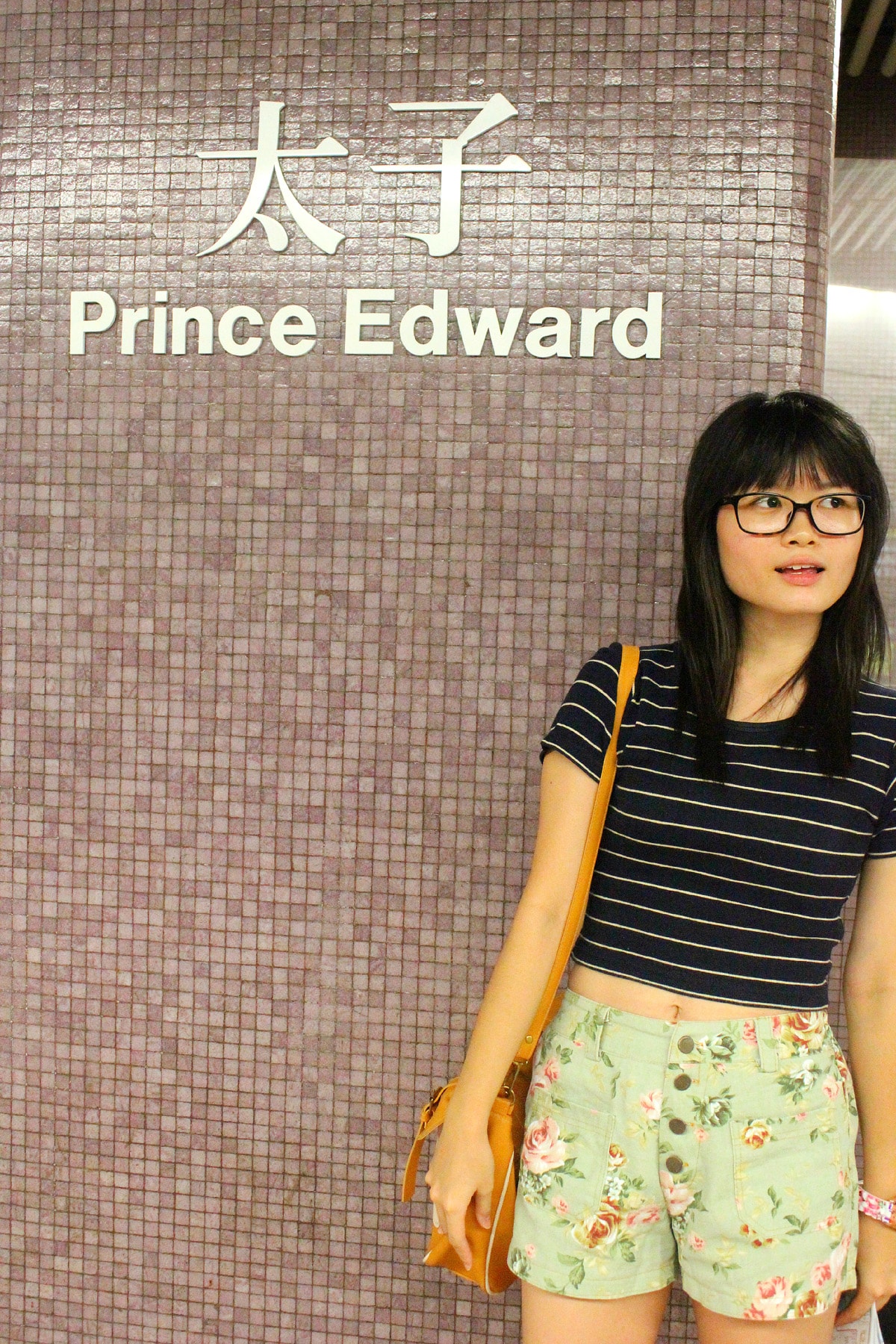 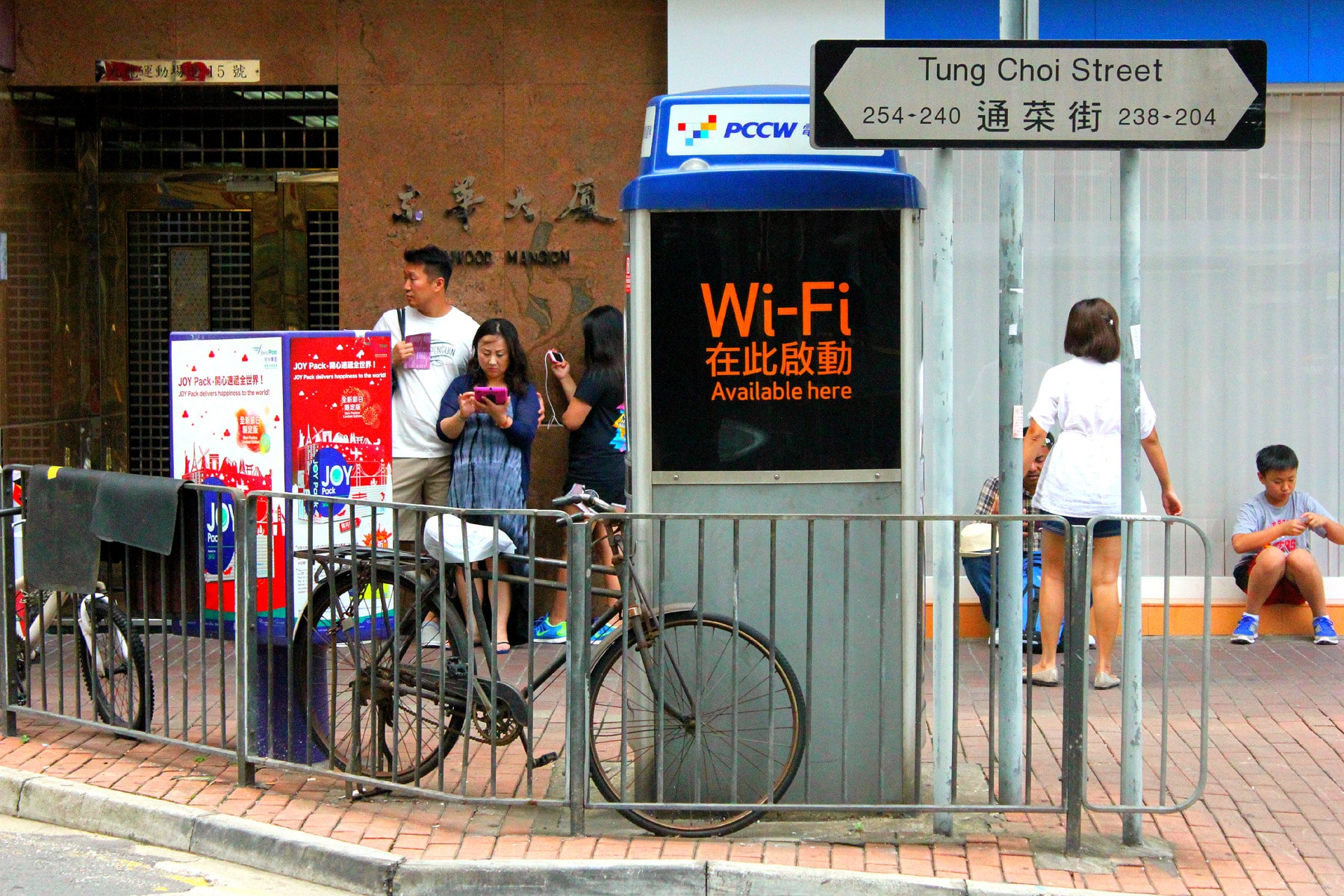 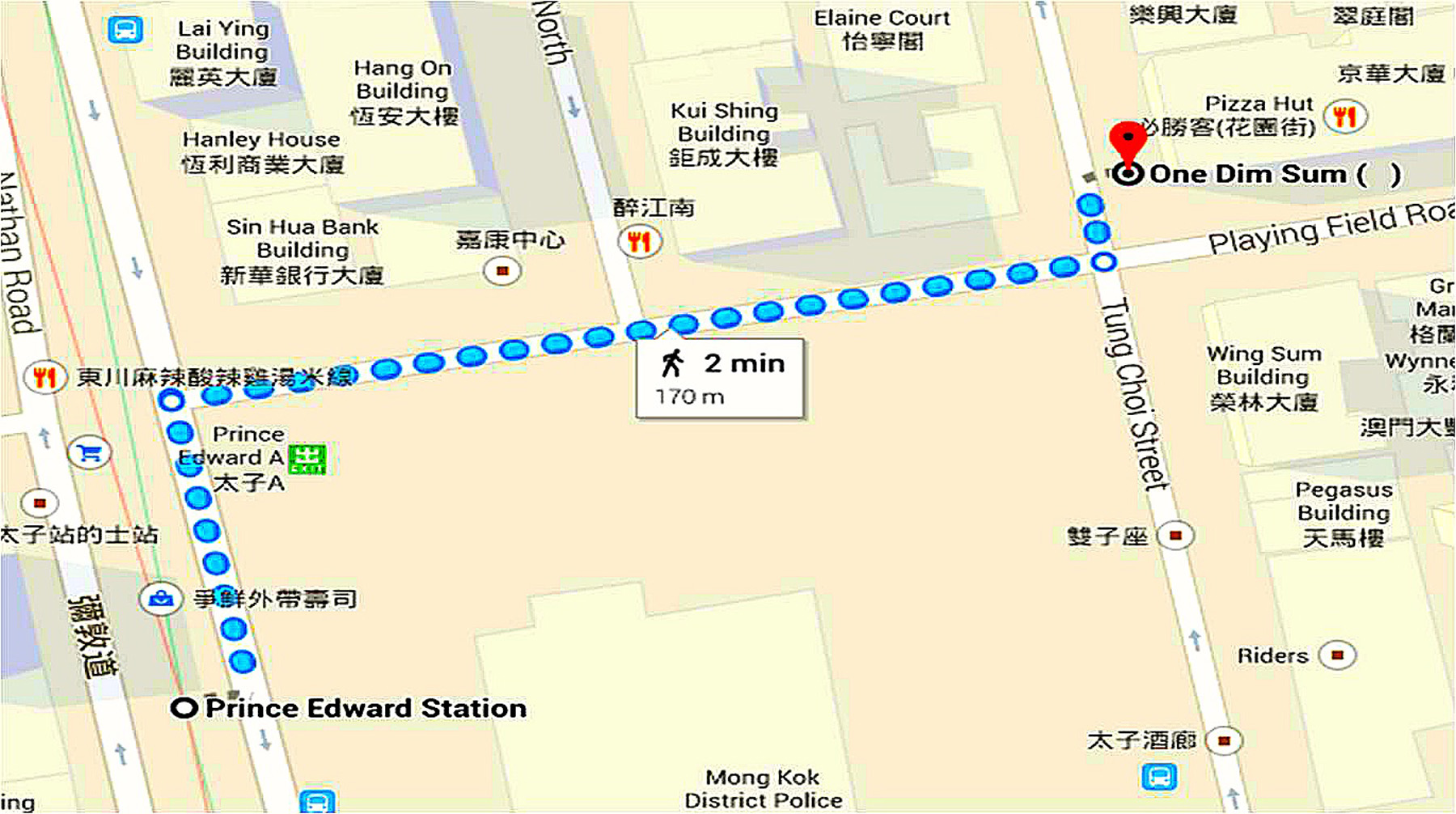 Get a queue number

J got our queue number upon arrival, and we waited along the street like everyone else until our number was called upon. 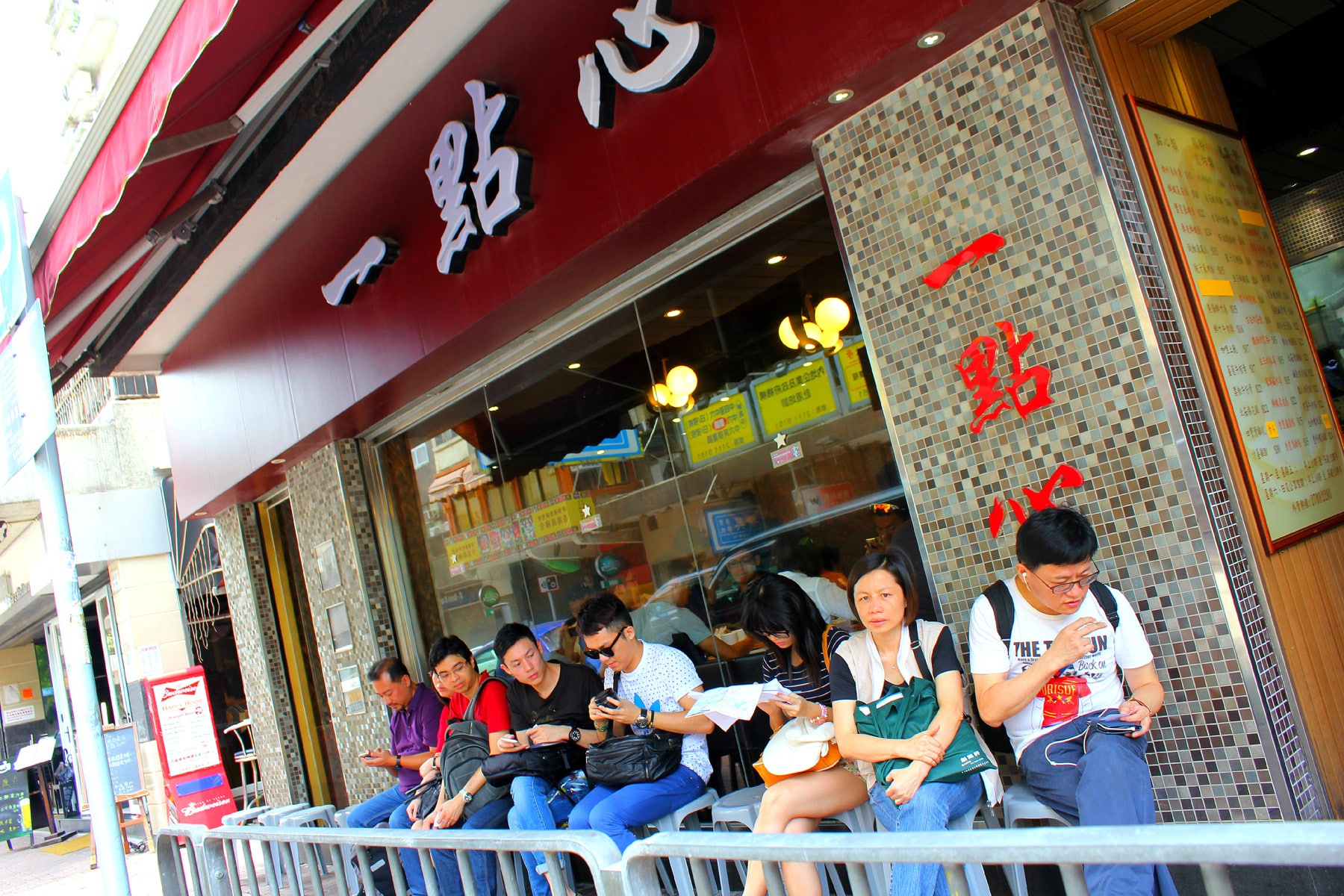 For One Dim Sum, it wasn’t so obvious as queue numbers were being call out, instead of broadcasted. Hence, we did saw some people who were clueless as they stood outside the restaurant thinking they should just wait; and only to realise they needed a queue number sometime later. 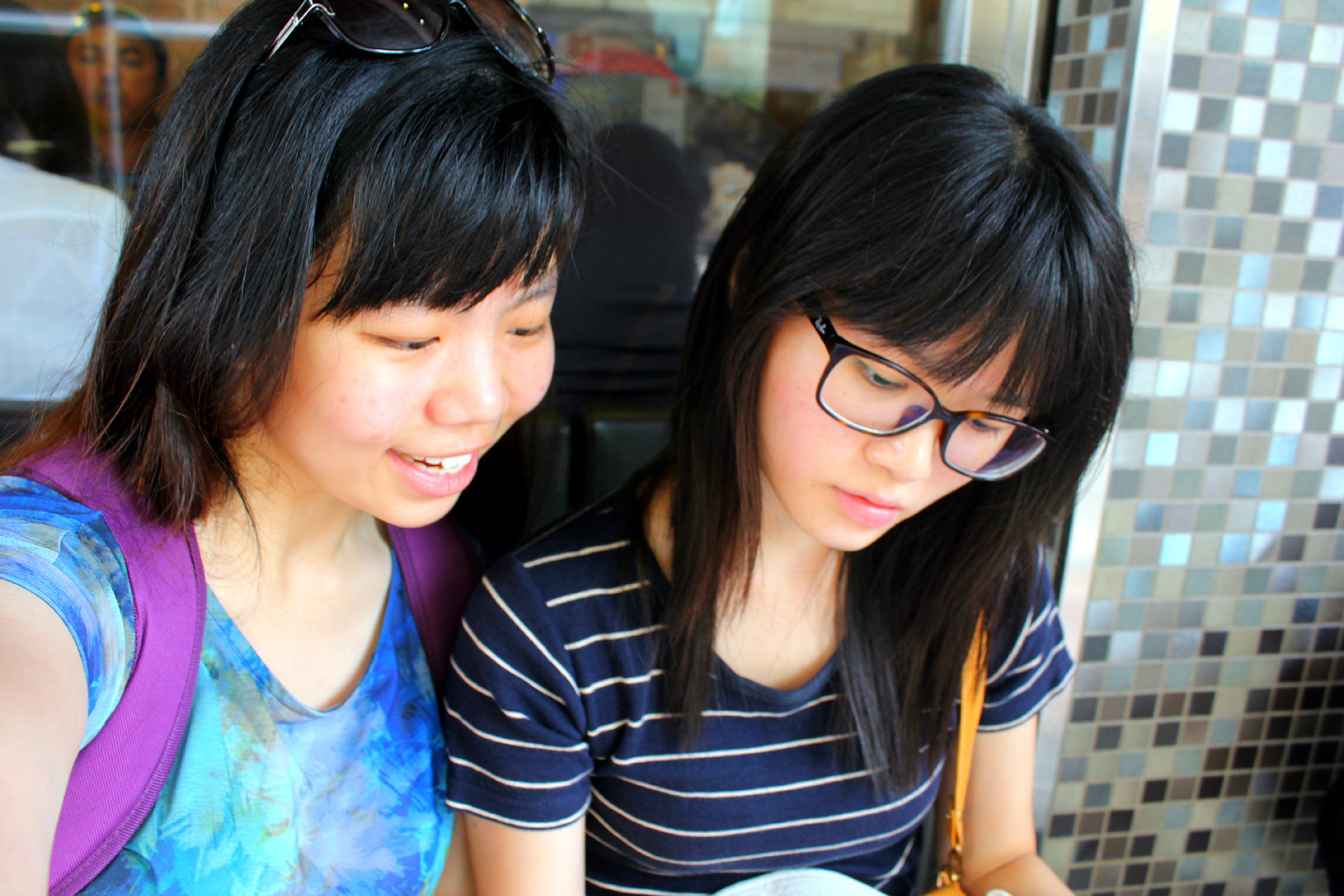 While waiting, J took a paper menu and a pencil so we could indicate what we would like and make the order immediately when we entered the restaurant. Alas, the menu was all in Mandarin, so it was my turn to enter, and got a English menu with pictures. Way easier like this- Haha…

We had plenty of time to see what to order, and of course snapped pictures- DUH… … That’s what we do best. Haha…

Sharing (a table) is caring 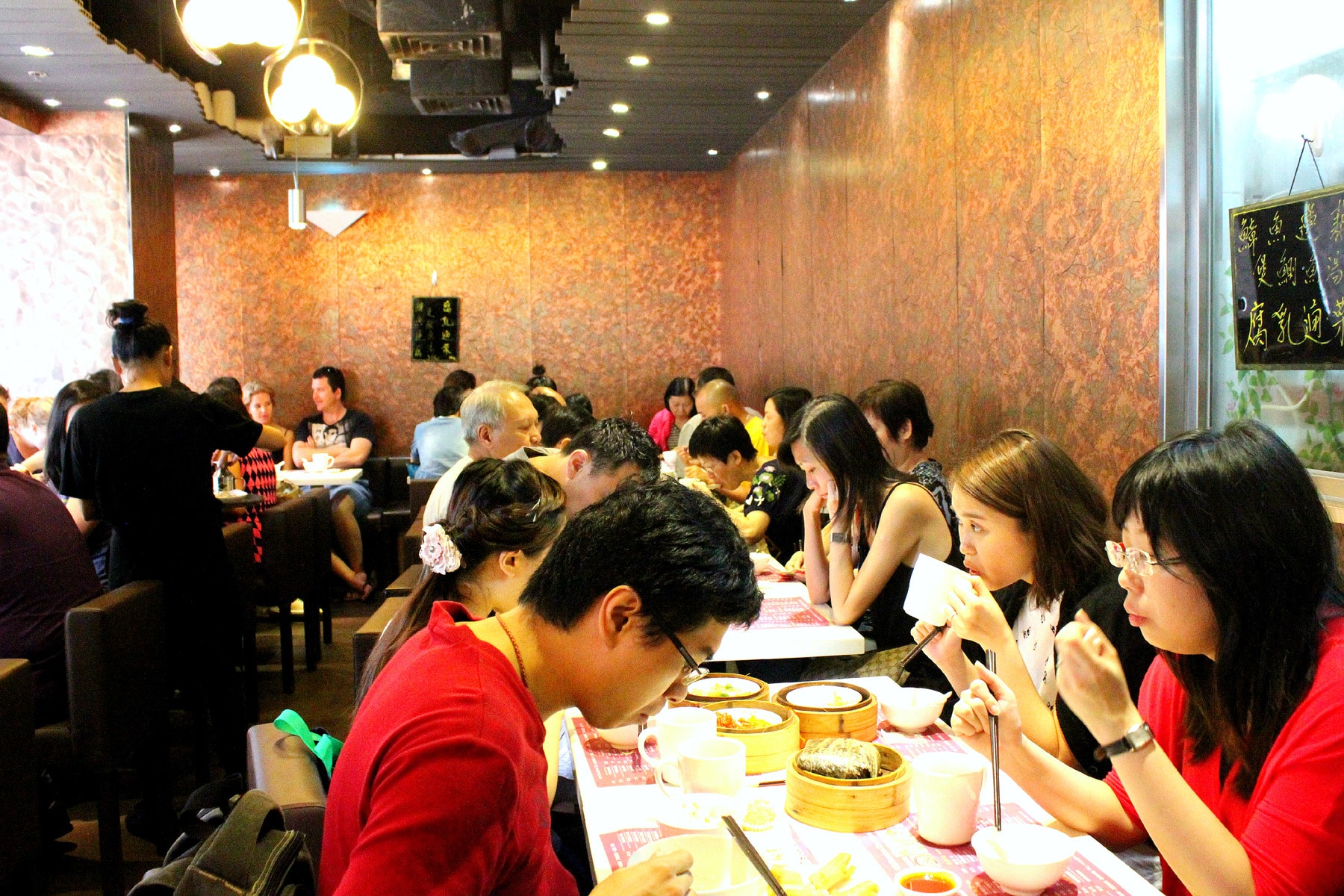 After all, this is a 1- star Michelin restaurant, and there was only the 2 of us against a huge crowd. As such, we had to share a table with 2 other dudes- probably from Taiwan; judging the way they spoke. Didn’t mean to eavesdrop on them alright- don’t judge. 😀

Sharing a table is indeed really common as long as you are at a fairly decent eatery with small square metres of floor space. We just had to get use to it.

After awhile, it becomes- Sharing (a table) is caring! 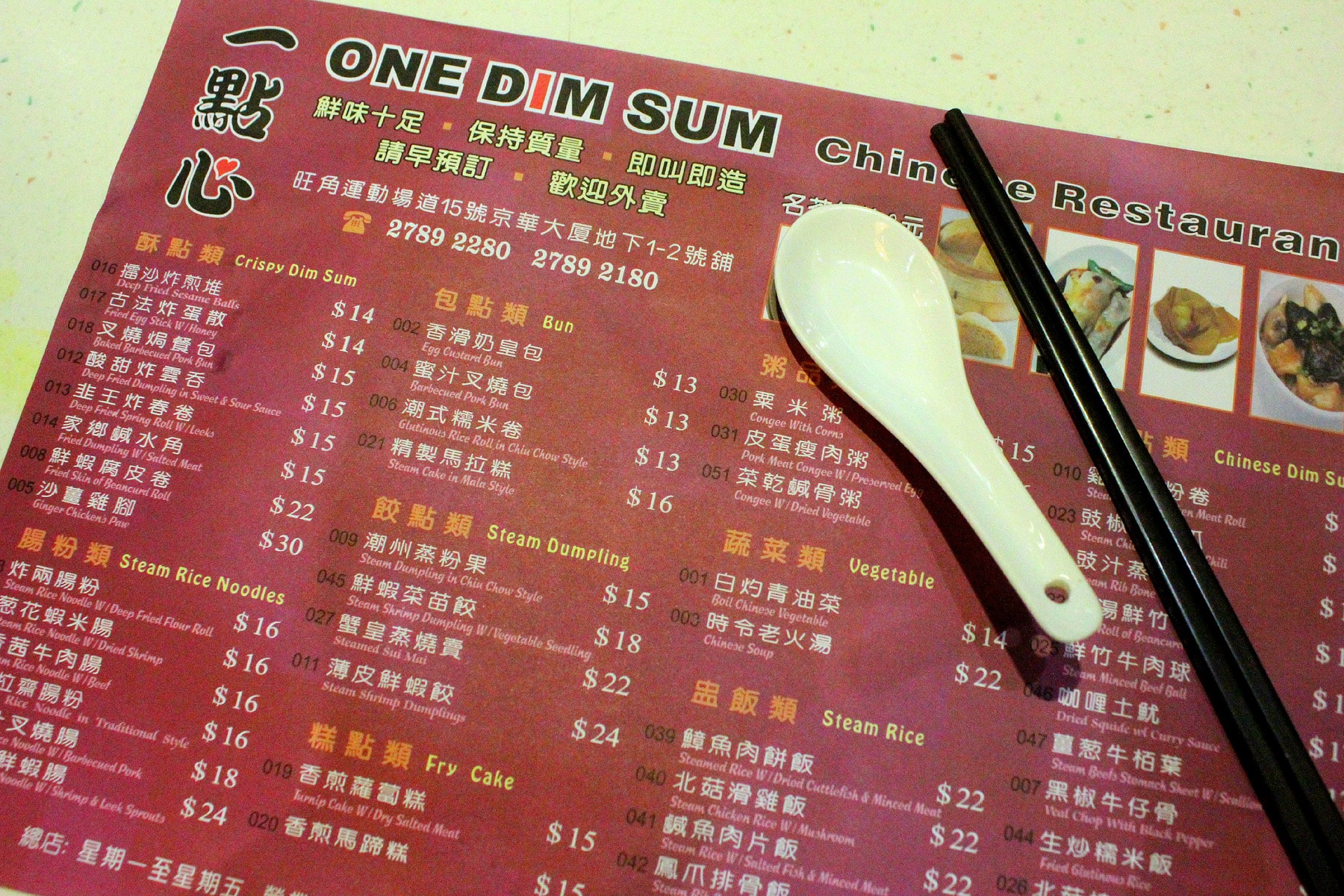 As usual, we split our orders into two sections, so we had time to savour the dishes and not feel inordinately overwhelmed by the meal as the table start to be awash with piling dim sums.

First dish was Steamed Minced Beef Balls. The beef balls were good. Juicy as they were, and in a cosmos with the sauce drizzled on them. 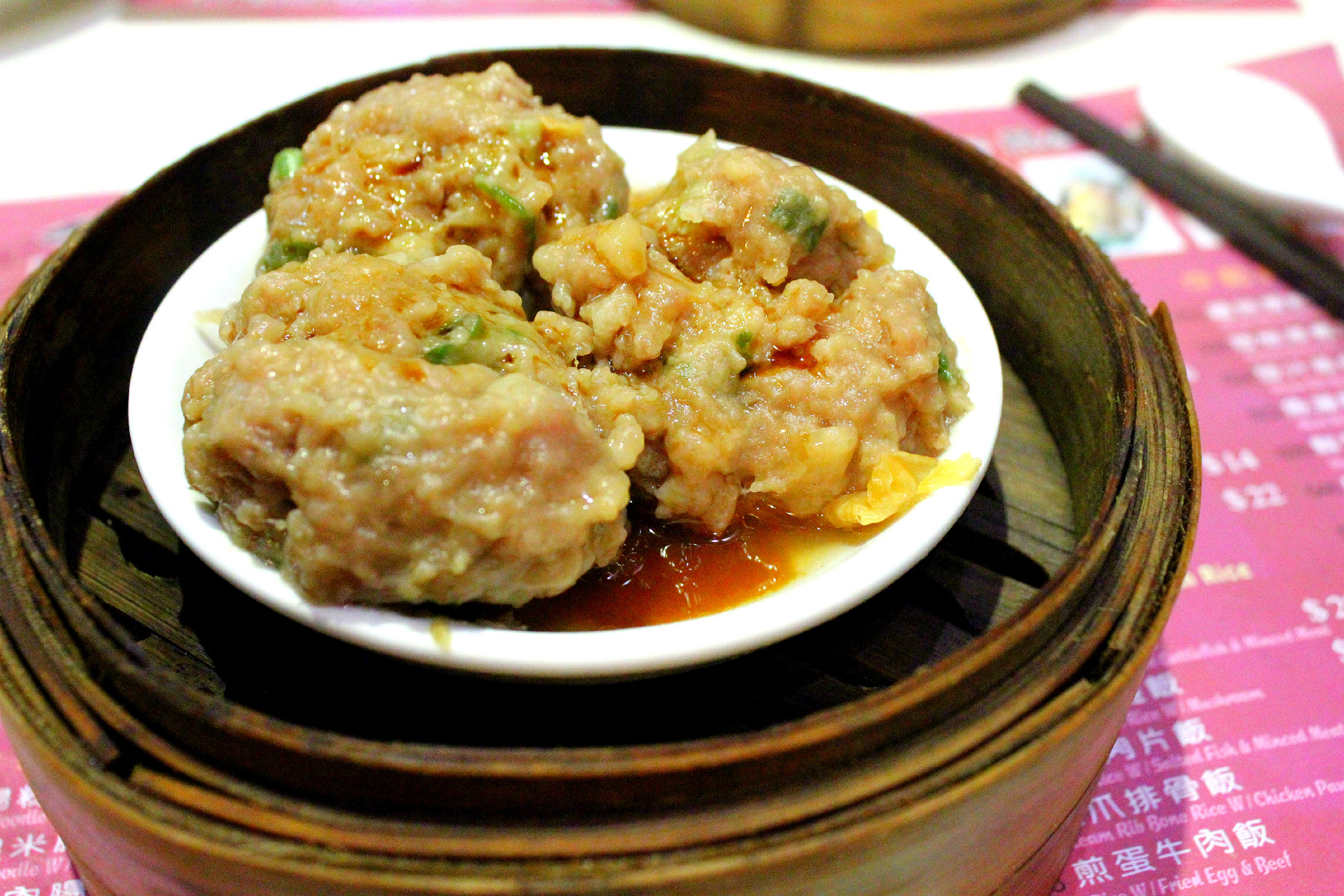 Next up was the Deep Fried Spring Rolls W/ Leeks (Popiah). Self- claimed as J’s favourite. Reason? Every time we eat dim sum, she wants to order this. And every time I will try to stop her- for spring rolls are quite standard. I mean, how can spring rolls go wrong right? But somehow this time she prevailed, and we ordered. 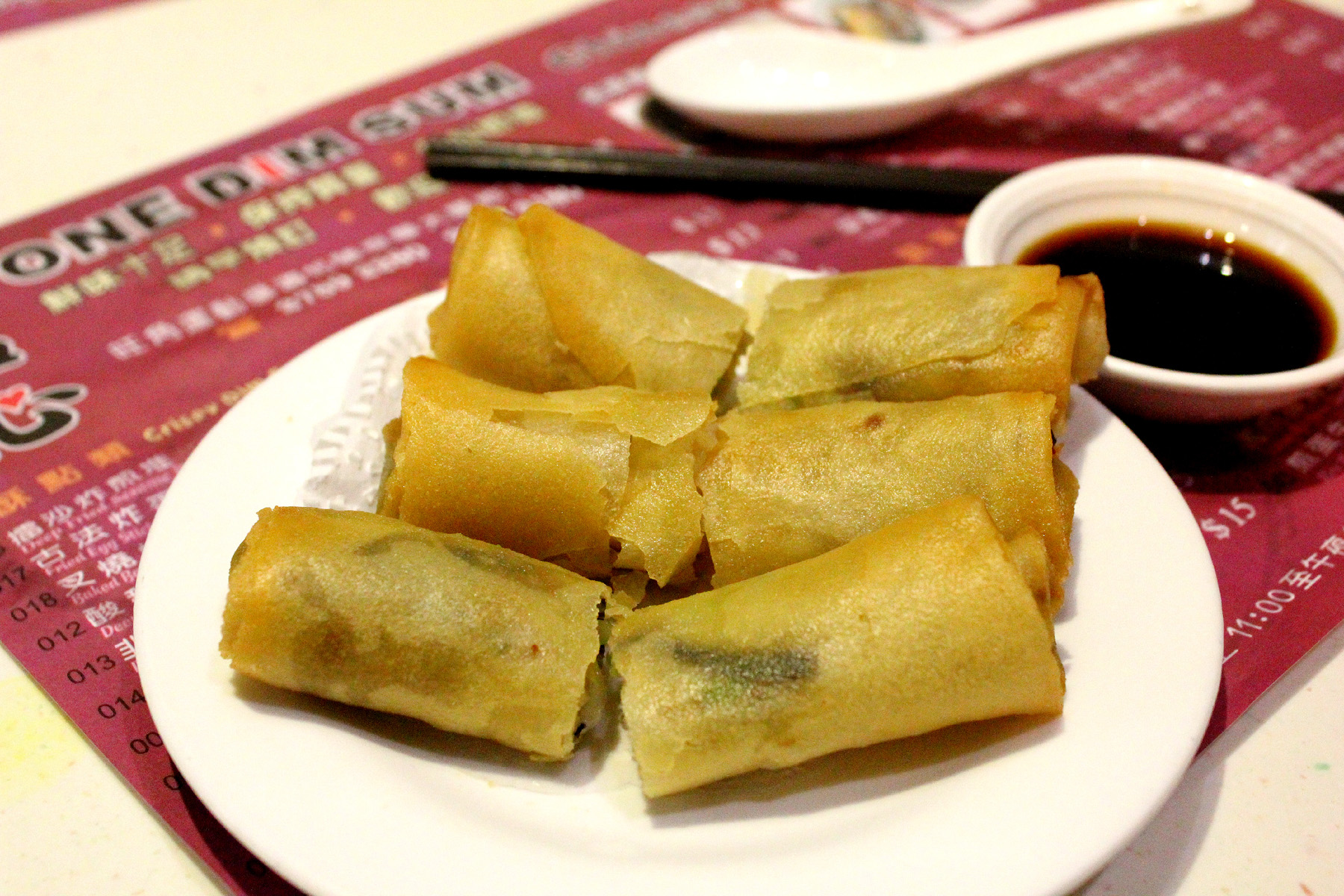 Based on my 2 cents, they tasted like any other spring rolls anywhere else really. It was alright; just nothing fancy.

Fried Skin of Beancurd Roll followed up. This was crispy and flavourful, with a substantial amount of prawn filling. I like mine with a dash of soya sauce. Yum Yum… … 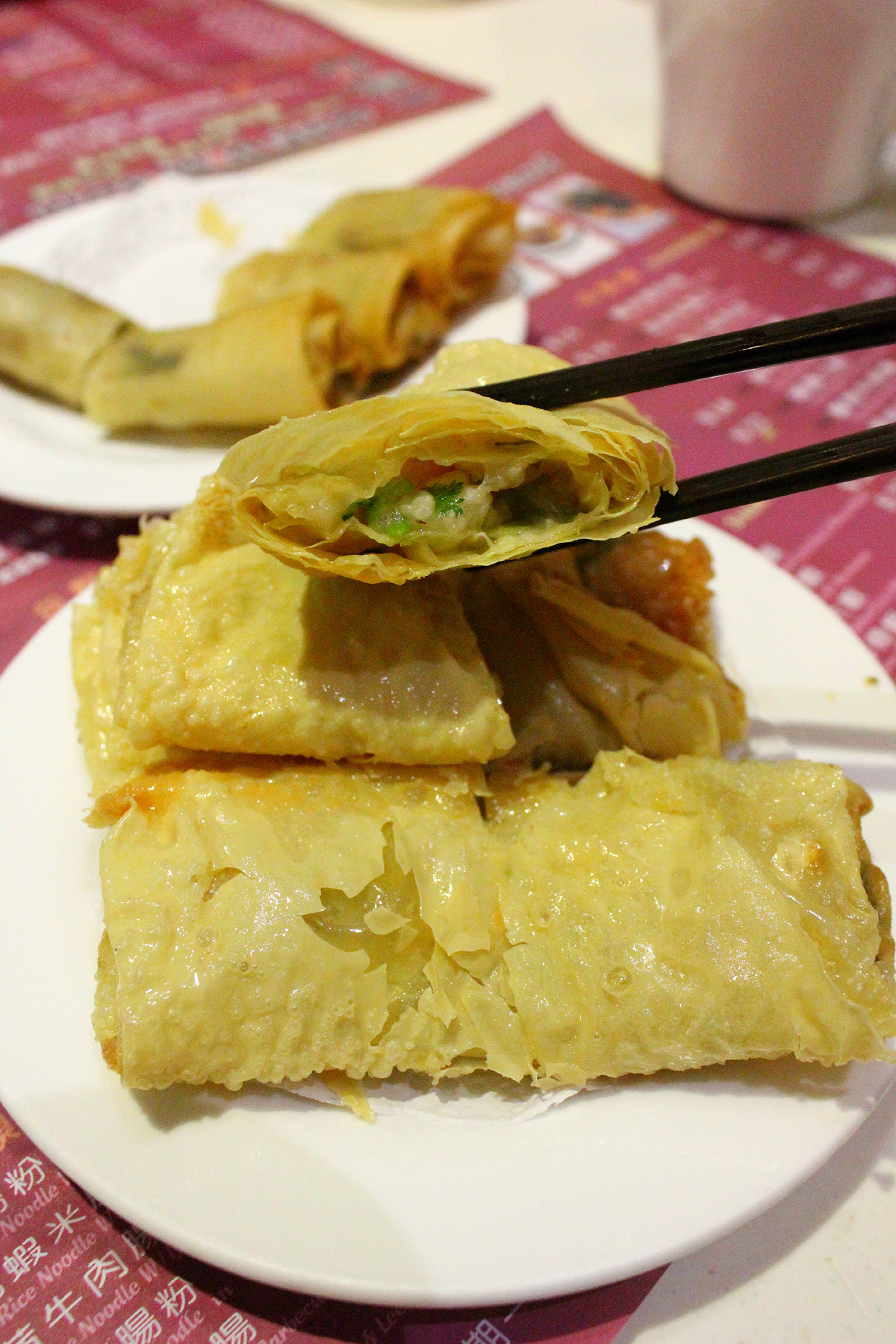 Next up was my worst nightmare- Fried Egg Stick (a.k.a Dan San). I have never tried this before, so when J said to order this I had no qualms. There are two options- either you have the Dan San with honey or condensed milk. We went with the latter because J said she read somewhere that it tastes better.

So when the odd-looking dish presented itself, with the waitress pouring the condensed milk on it, I thought to myself, “Okay… … What is this again?”

For those who have never tried this before, let me try my best to describe the texture that lingered in my mouth. 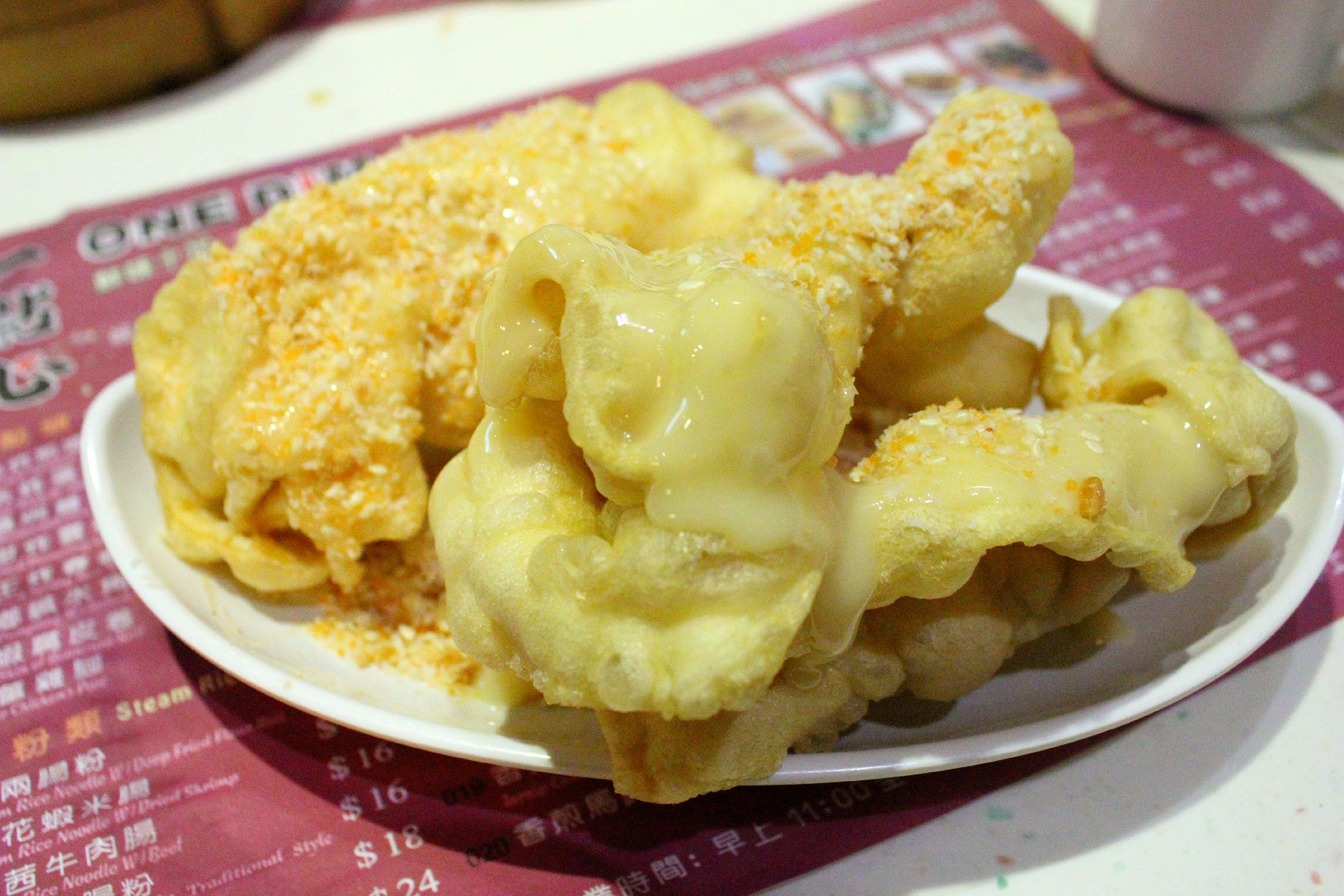 Dan San is an extremely crispy odd-looking thing (I am sorry, I don’t know how else to describe its shape). When I first bit through it, it was too brittle that it broke into a million crumbles in my mouth. Just imagine eating a mouthful or two of finely chopped biscuit crumbs- that was how it felt like in my mouth. The crumbs felt very airy and light. It was washed with an after taste of condensed milk.

I do love sweet, and the condensed milk was suppose to be helping me deal with the explosion of crumbs happening in my mouth, but I guess it wasn’t of much aid.

Basically, Dan San and I can’t be together. Maybe this Dan San requires a much more sophisticated palate to appreciate it. I guess I don’t make the cut. :S

Steamed Rice Noodle Roll (Zhu Chang Fen) was next. We chose the one that was stuffed with BBQ pork. I love rice noodle roll that do not stinge in their fillings; and this was one of them! The rice noodle is not too thick and has the right amount of springy texture to it! 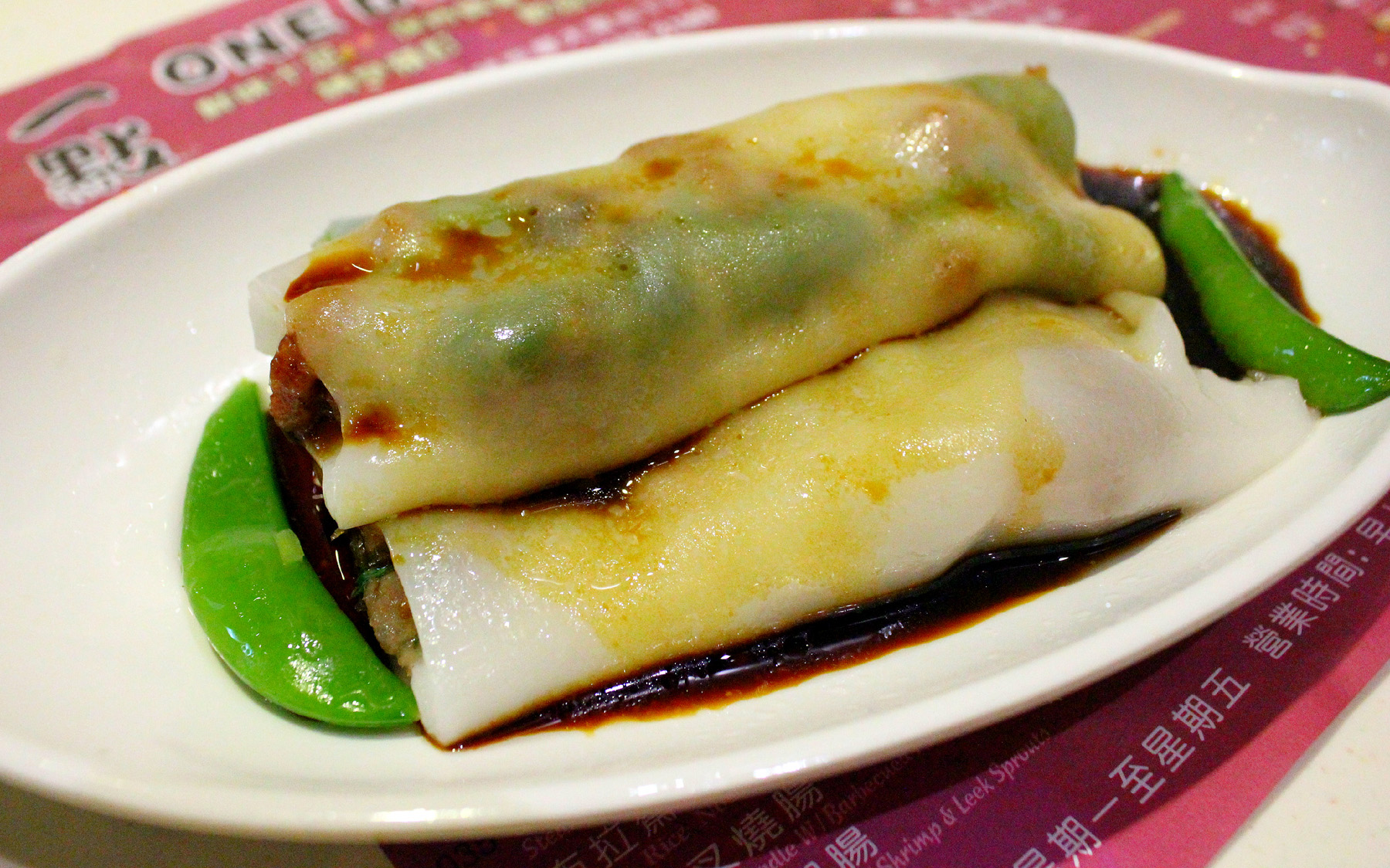 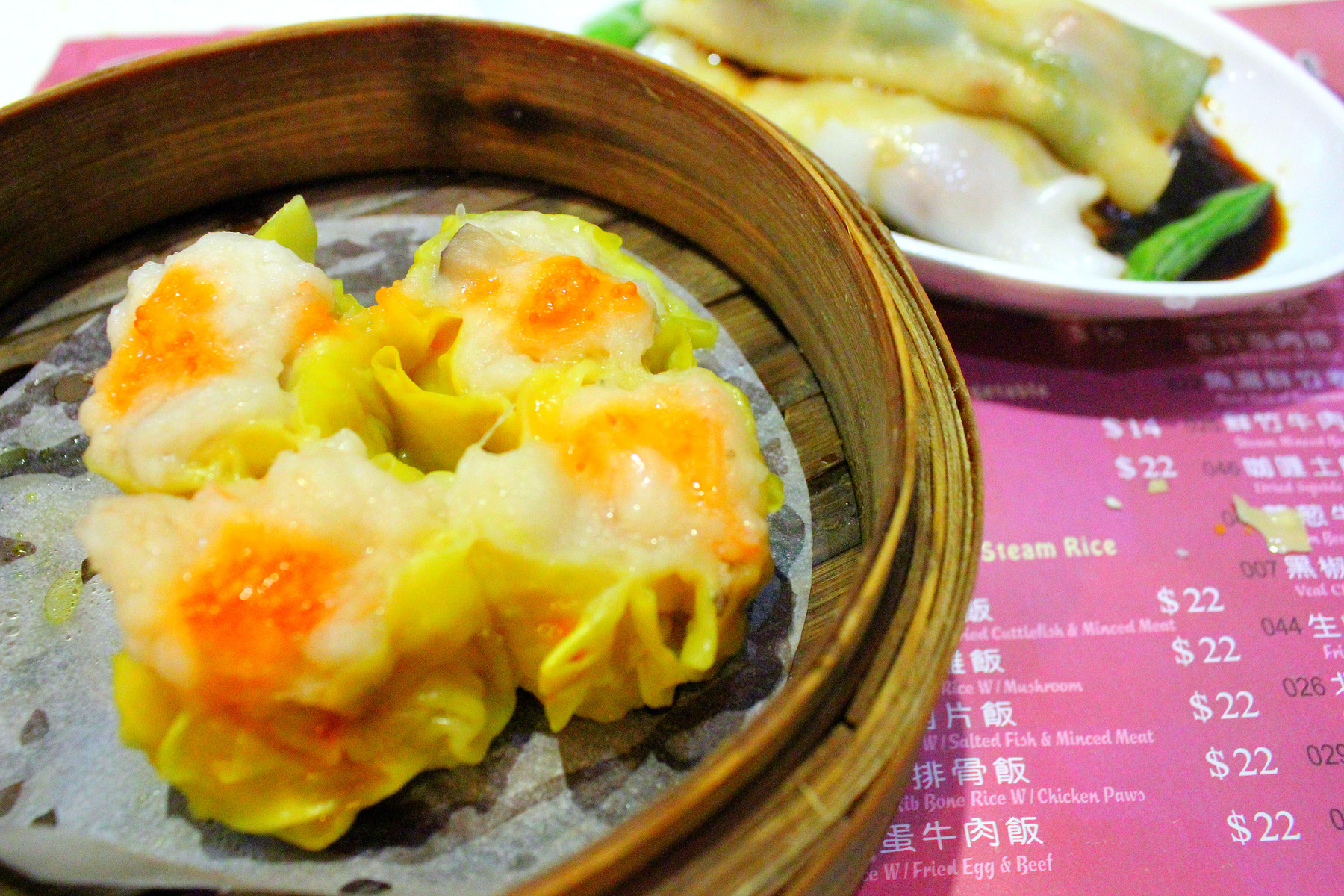 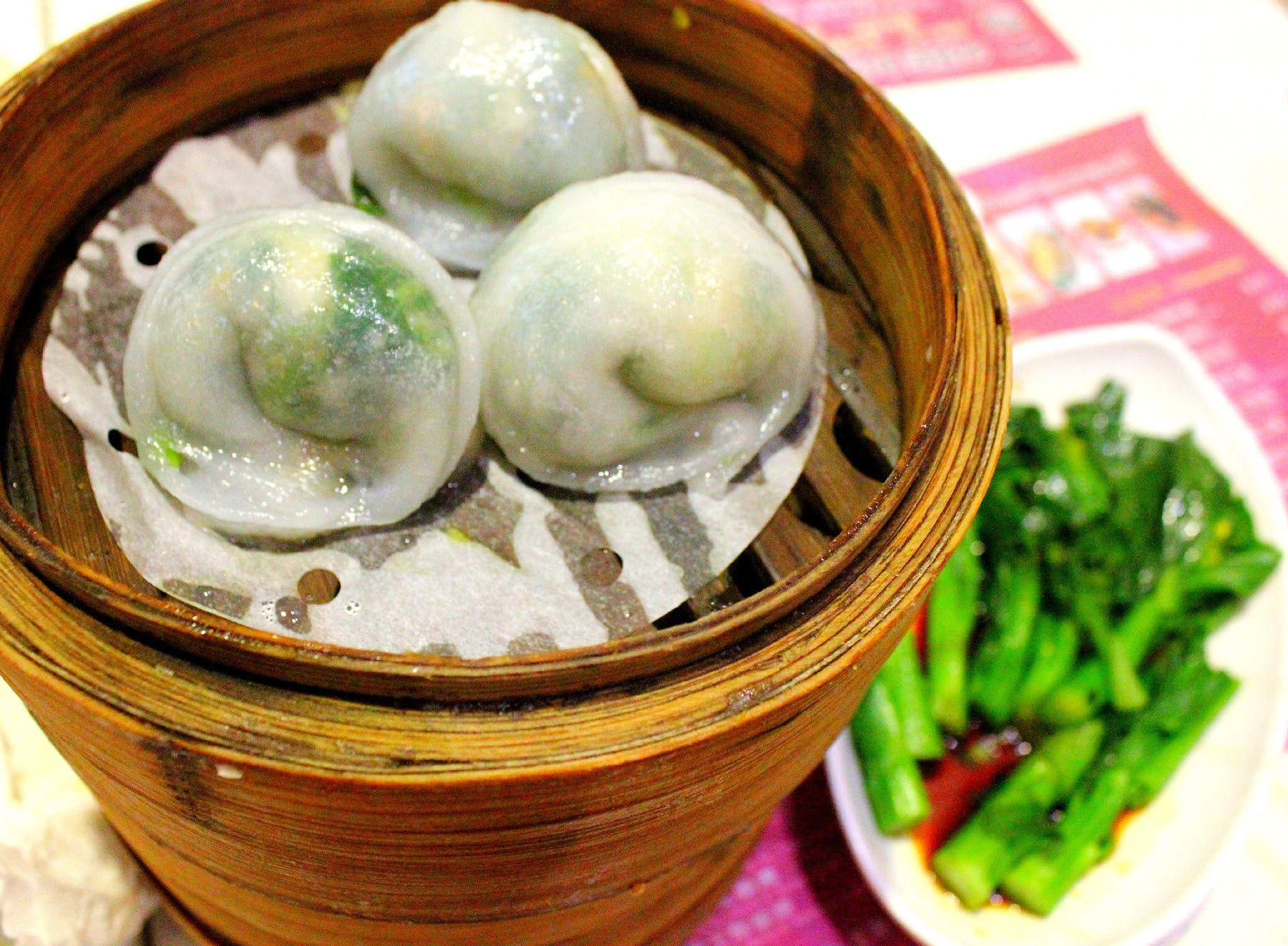 Now typing this, it is no wonder J got so sick of shrimps. I grasped it now. Haha…! 😀

Because the 2 dudes in front of us were happily sharing a plate of vegetable with oyster sauce, I was so tempted to just reach forward with my chopsticks and kidnap 1 or 2 stalks of veg if they weren’t looking. 😀

As our final dish, though we were pretty much full- we ordered a plate of Boil Chinese Vegetable. Okay, not we… I decided that we should order the vegetable- ’cause if we didn’t I might actually reach forward and help myself to a stalk or two.

The total bill was approximately HK$166. For this number of dishes at this price, it was really inexpensive!

But the big question is would I want to go back there when I am in Hong Kong? Hmmm.. … Most probably not. Why?

There is no lack of good dim sums in Hong Kong. And some eateries we went are really underrated. Sometimes all we need is a little fate to stumble upon a good eatery which is not widely mentioned, and you will feel like you have found a bonanza.

Since I had dined in One Dim Sum, and the food is well as good as other restaurants, then I reckon that a onetime experience was all I needed. I do not feel a call for to go back there and join the long queue for a meal which I could easily get at other restaurants in Hong Kong- probably with better ambience too.

But having said this, it is just my 2 cents. No offense to people out there who love this eatery! 😀

Remember to travel whenever to get yourself some DIM SUM! 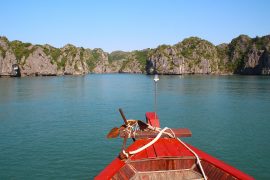 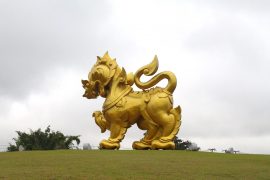